This is how many of my Saturday afternoons go: I ask my husband to get into the Jeep and drive me around. I sit in the passenger seat with my camera in my lap as we drive dusty, rural roads. Every now and then I say, "this is a nice spot. Let's stop here for a bit." (or, occasionally, "OMG stop stop stop I think  Then I get out and wander around and take pictures while he stays in the car and plays games on his phone. If it's a particularly deserted place, I let the dogs out, too. Then I get back in the car and we continue on to the next likely spot.

This afternoon we were toodling around the hills on the Washington side of McNary dam on the Columbia river. I saw a likely spot to get a good view of the dam and river and we followed our normal routine. I climbed up on top of a small cliff, dogs trotting behind. As I was snapping pictures of the dam, I saw furry black shape out of the corner of my eye sniffing around near the edge of the cliff. I looked up just in time to see Zelda walk right over the edge of the cliff and disappear from view.

In the time it took me to process the fact my dog had just fallen a substantial height, and to take a few steps in the direction, she came running up the trail towards me and Sammy, panting happily, no limp in sight.


Tom saw the whole thing from his vantage point inside the Jeep. I didn't hear the thumping sound when she hit the ground, but he assures me it was quite loud. He said she bounced. She didn't even act shaken. Not even a cursory few minutes of nervous yipping. Nothing. 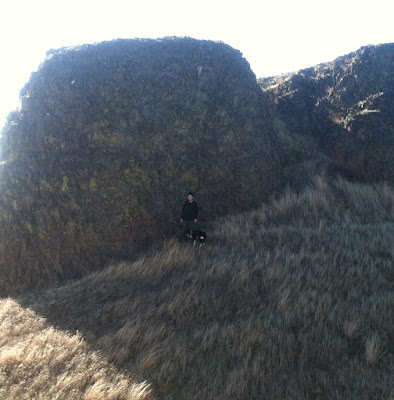 After I made sure she wasn't broken, I had Tom take this picture of me with Sammy (Zelda is out of frame somewhere) standing about where Zelda landed. For scale, I'm about 5'7". Although from this picture it looks like it tapers, the side we're standing on is a shear 90 degree cliff face. She may have slid the first few feet, but she fell through thin air at least 20 feet, and that ground is covered in fist-sized lava rocks. Nothing to show for it but a small scrape on her abdomen and one on her chin.

We cut our road trip short and went back home, but she continues to be completely normal.

Now I'm really sad that we had her spayed. Think of the money we could have made breeding our special Rubber Collie line.

The State of the Garden

Took a short break from animal rescue the other day to get some garden preliminaries out of the way. Mostly planning, and a little planting. The enormous patio area will be home to the container garden. Separate pots for mint, cilantro, chives, parsley, thyme, rosemary, dill, strawberries. It's easy access from the kitchen, has a variety of sunniness levels and will look good with a bunch of pots.

I'd like to have them on various stands, both to add visual interest and to make it less likely the cats will use them as litter boxes. To that end, I've experimented with stacking these concrete blocks and stepping stones (left in the garage by previous owners) to see if they'll work as plant stands. The jury's still out. Once the weather improves, we'll also be moving our (awesome) barbeque that my parents got us for christmas a couple years ago out here. I'd like to get some patio chairs and table and maybe build a bench (maybe from the scrap lumber I've got).

Note I've also finally hung up a bird feeder. Someday perhaps, there will even be birds visiting it. This is the SE corner of the yard. I tossed the Halloween pumpkins here to rot, and rot they have. I guess I'll get some pumpkins growing here in a few months. If they sprout, I'll thin them and give them a nice compost pile and water, if not, oh well. It might be fun to try training the vines up the fence. I placed the decorative concrete thingys there temporarily, but will probably get around to making that more permanent. The SW corner of the yard. I think I'll put two or three containers of snap peas and a trellis in this corner. I don't want to plant directly in the ground because there's gravel in this corner I don't want to remove, and plus I'm guessing this soil has been saturated with lawn pesticides and fertilizers from the previous owners. Raised beds and containers are great! This garbage pile is just on the other side of the back fence, and is on city-owned land. It's obvious the previous owners have been tossing stuff here, probably since the house was built in 1979. I'm sure it's breaking the law, though I doubt in the small rural town I live in I'd ever be fined, it's still an eyesore. I've been slowly cleaning it up and plan to have it completely cleared by the end of summer.

I also have discovered quite a bit of useable scrap lumber in there. I think the previous owners tossed a lot of it back there in the last few months before they sold the house, because some of it is in practically new condition. I should have enough scrap from this alone to build my two raised beds and have enough left over to make a couple simple benches for the patio. Sure, it won't be treated wood and will probably rot out in 3-5 years, but who cares. It's free, it'll work, and I don't even know how long we'll be living in this house. Here are the piles of sorted scrap wood I've collected so far. Another component of the container garden. I collected seeds from Halloween's mini pumpkins (grown locally really locally, like, 2 miles from my house, so I know they grow well in this area!) I tossed some half-composted leaves in with some potting soil and planted the seeds. Covered with wire mesh to keep cats and dogs out. I'll probably move it next to the fence with a trellis in a few months. My not-fully-thought-out compost bins. I thought one would easily get me through the winter and spring, but I forgot that I switched to compostable cat litter. It now makes up the bulk of my household compost. I've had to build a second one, and now it's almost full, too. I need a new plan, but this is OK for now. Hopefully the warm weather will mean faster break down time. I'm putting the raised beds along this side of the house. It faces south and in the summer will be in full sun aaaaallll day. The tomatoes should love it, but I do worry about it drying out too quickly. It's also nice because it's out of any "pathways" for humans or dogs, and will be less likely to be used as a springboard/agility obstacle/etc for the dogs. I want to have lettuce and spinach here, but I'll probably have to rig up some shade so they don't get toasted. Maybe a vertical trellis with cukes or something. The front yard. Some kind of bulbs are already coming up. I'm not sure if I'll be keeping them, but I'll water them and keep them alive for now just in case. If I get ambitious, I may put some hanging baskets of flowers here. That pot is my poor, sad lavender plant that I killed last year. I'll probably recycle the container for one of the patio herb gardens. Other part of the front yard. I want to plant native shrubs. I'm thinking 2 sage brush, and in front of that, 4-6  rabbit brush. Should be attractive, attract native pollinators, and be low maintenance.

I really wanted to get some chickens this year, but with all the animal fostering I've been doing I just don't think it's in the cards. One thing I've been very careful to avoid so far is burn out. I know myself well enough not to add more permanent animal residents to my life unless I cut back on fostering dogs and cats (which isn't going to happen).
Posted at 3/01/2012 05:16:00 PM 2 comments: