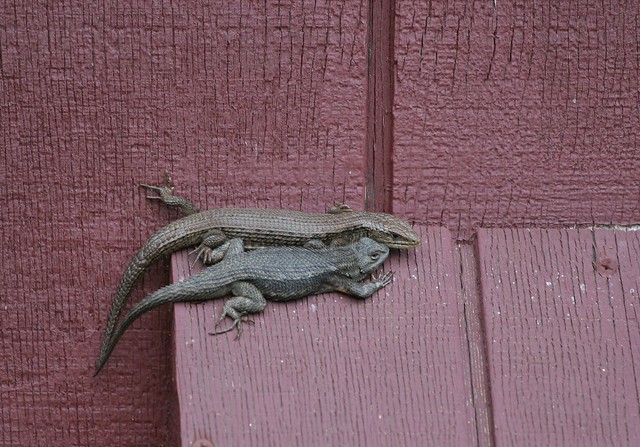 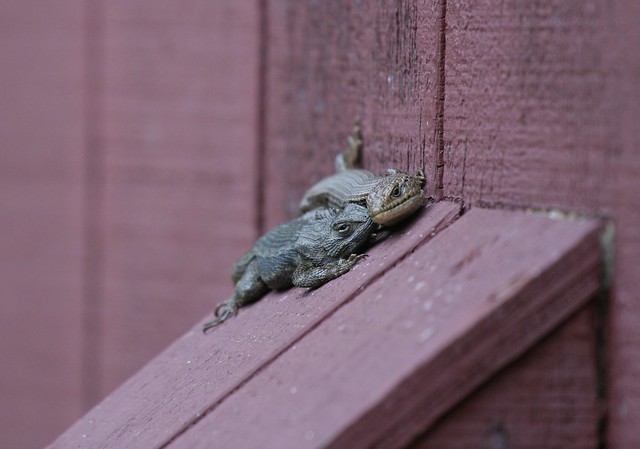 They look very similar, and occupy similar niches, but they're not too closely related. It's probably the equivalent of a pig and a deer cuddling up together.

Email ThisBlogThis!Share to TwitterShare to FacebookShare to Pinterest
Labels: evolution/natural selection, out in nature, photography, wildlife

My twist on apple crisp the way I like it. Well, love it... I actually died when I took the first bite, so this is my ghost speaking to you from the beyond the grave about this very important recipe. (Sorry to those who have any kind of food allergy, because this hits pretty much all of them). 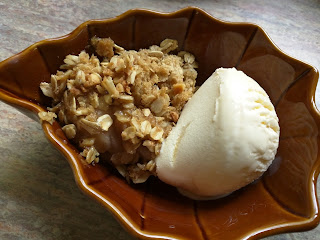 Apple mix:
5 large apples, peeled, cored and chopped into little squares (or a 50:50 mix of apples and pears. Yum)
Tsp of cinnamon, maybe some nutmeg, pinch of cloves also good
about 1/4 to 1/2 cup of finely diced candied ginger (yeah, you read that right. I said ginger lovers, didn't I)
about 1/2 a lemon worth of lemon juice

Toss that all together and dump into a square glass baking dish.

Cut that all together, then mix in:
1/2 cup oats
1/2 cup chopped roasted hazelnuts (if you scavenged them from your neighbor's yard and roasted them yourself, you get bonus points), pecans or walnuts would also work swell

If anyone actually makes this recipe, I really would like to know. Not many people love ginger the way I do. 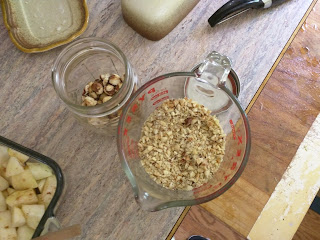 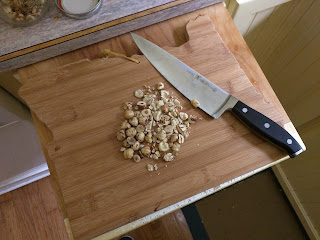 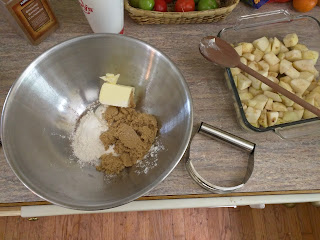 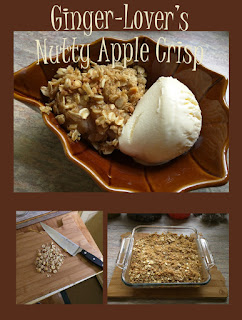 I've been doing daily updates on my Instagram for Inktober this year, but here's some of the better ones: 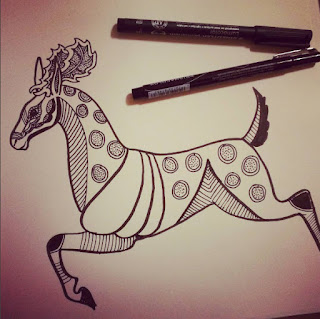 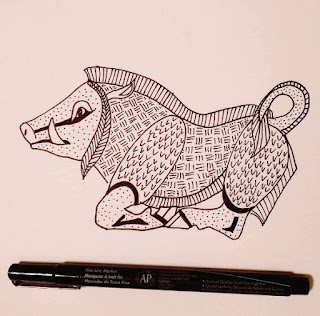 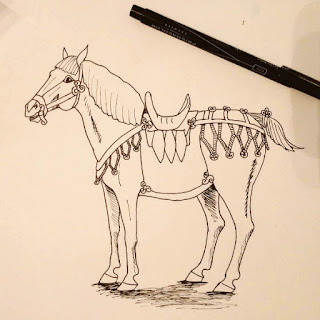 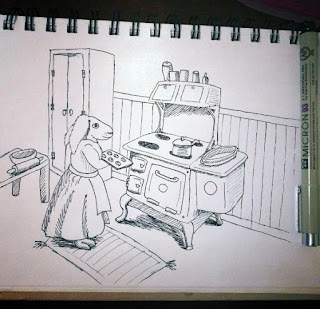 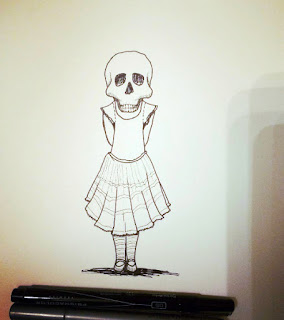 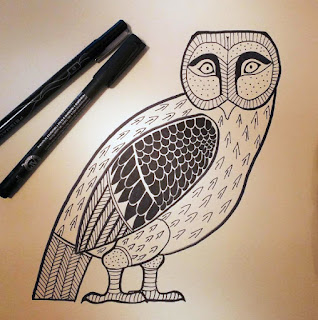 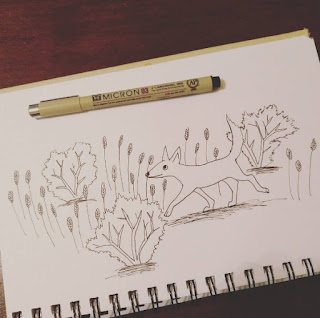 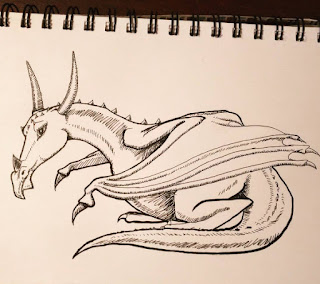 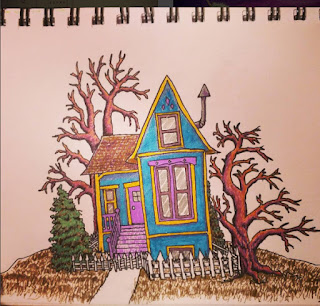 Near Ye Olde Homestead lie many acres of forestland that were harvested about 70 years ago. Unlike today, where saplings are planted within a year after harvest, the old standard was to leave a few adult trees to re-seed the area naturally. You can still spot these parents because they're significantly larger and scragglier than their children. You can also still find many old stumps with a springboard notch still visible on the downhill side. Chainsaws were still not very common back then, so handsawing was still a thing. This generally meant two man teams; one on the ground, and one on a springboard shoved into a hasty notch on the downhill side.

Searching for springboard notches while hiking is now a classic PacNW pasttime. 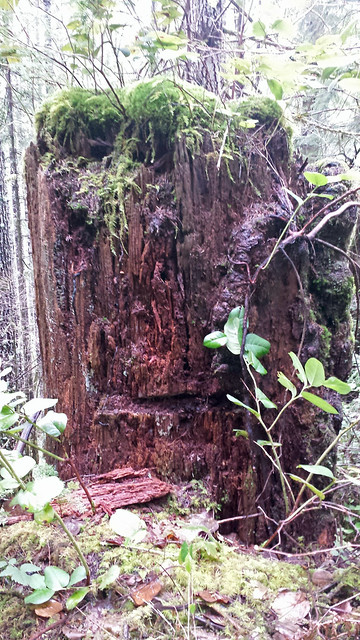 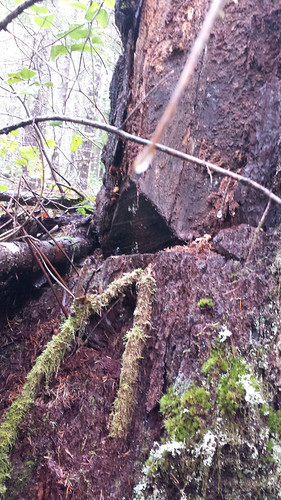 I ran across this extra special stump during a Chritmas hike. It must have been a bitch for those poor loggers back in the day: they tried really hard to cut it closer to the ground, with four saw marks (note how ragged the saw marks are, too, showing that it was a hand saw, not a chainsaw), 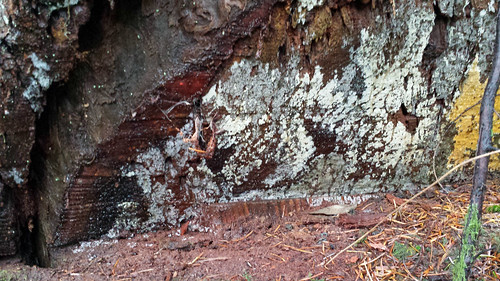 before they gave up and cut six feet higher up the trunk. (That's the notch from the springboard they eventually put in). 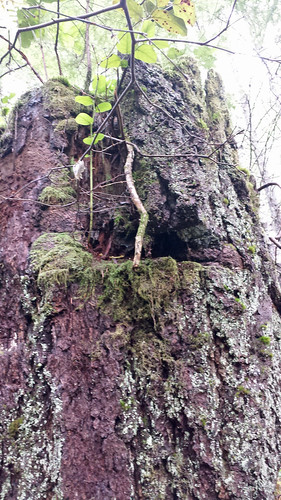 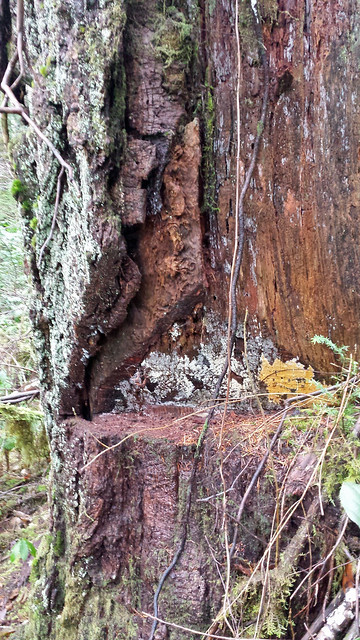 There's also signs of what I think are healing in the bark. It lived as  'living stump" for at least a few years before finally succumbing completely to rot. (Now home to numberous invertebrates, mosses, lichens, and a robust salal plant.) Nearly every one of these old stumps is a nurse log. Huckleberry and hemlock love them especially.
Posted at 9/26/2016 07:00:00 AM No comments: 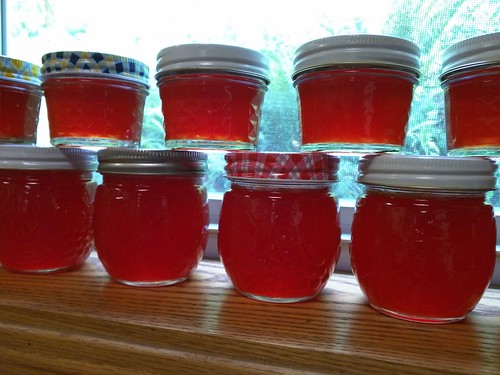 Salmonberry is native to the Pacific Northwest and is very important to native americans all up and down the coast, from what's now Alaska, to what's now Northern California. It hasn't been domesticated, so this is only available by knowing a good picking spot (and having permission to pick there).

I also feel obligated to balance the extreme fruit-bias in our culture by informing everyone that the entire plant is edible. The fresh spring sprouts can be eaten raw or steamed.

The berries can be tricky. It's hard to tell when they're ripe because they come in such a wide array of colors (pale orange to dark red). 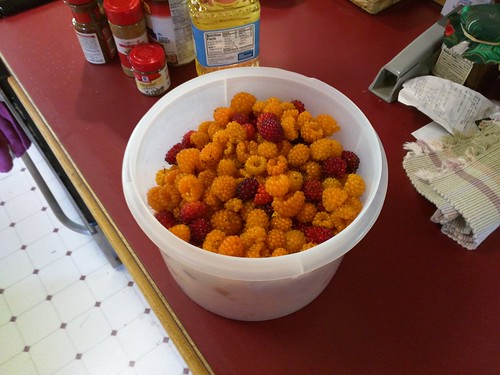 (All of these are the same level of ripeness, from bushes a few feet apart)


They have inconsistent (and most people say bland) flavor; birds and bears eat them before you can get them; and they tend to grow near stinging nettles and devils club. 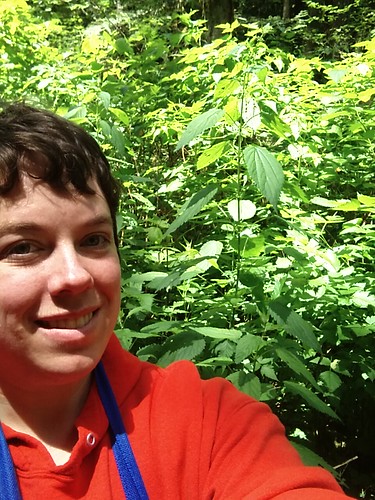 But they're very juicy and I'm lucky to have a good spot on private land that no one else but the birds are using. My first trip to the patch was Memorial Day weekend. I got a decent amount, but the picking was better when I returned two weeks later. 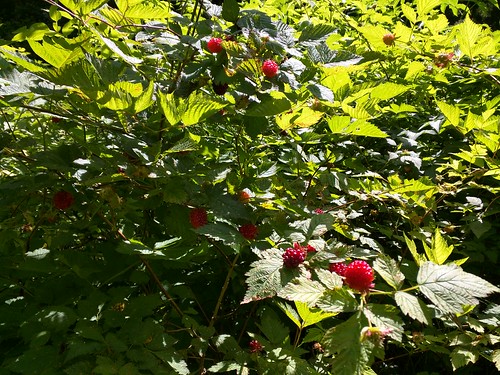 For making the jelly, I got tips from this awesome blog, but I did a couple things different. I definitely agree with her that I would never make salmonberry jam - the seeds are ridiculous. (She's also in a much harsher environment than me. Our Oregon salmonberries grow ten feet tall).

I see a 4oz jar of Alaskan salmonberry jelly is selling on Amazon for six bucks, I should get on that. 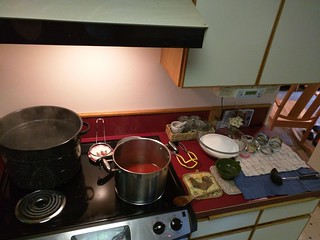 This was my first time tasting salmonberry anything (except fresh). It's very good. Reminiscent of raspberry (go figure), but it's own unique flavor.

Email ThisBlogThis!Share to TwitterShare to FacebookShare to Pinterest
Labels: food/farming/hunting/gathering, out in nature

In the wall of a fair booth I volunteered to clean out. It's only July 5th, usually you don't see them this big until at least the end of July or August. The nest was mostly inside the wall, with three exit holes on the outside wall, and two exits on the inside. It was probably three feet in diameter inside the wall cavity.

Book review: Pit Bull: The Battle Over an American Icon, by Bronwen Dickey 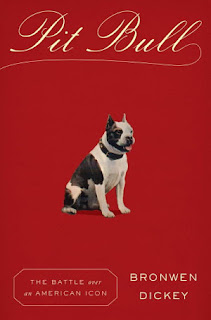 I've read hundreds of blog posts and articles about pit bulls, and written plenty myself. Weirdly, the feeling* that built in me after each chapter was… relief. I never have to write another blog post about pit bulls. Anytime I feel the urge to correct some ignorance, I'll point them to this book, and if they haven't both read it and formulated a response, they don't get to have their opinion on the subject taken seriously.


I add this to my short list of books that should be required reading for animal shelter employees. But unlike the other books on my mental list (*cough cough* Winograd's Redemption), I can recommend Pit Bull with zero reservations about the content.


It would be easy to compare this book to some other ones, such as The Pit Bull Placebo, but unlike all the others, it does not take a stand (except perhaps in the very last sentence) and then work to convince you of anything; it exhibits a type of journalism that seems to be dying out in the mainstream media. It’s not just that Dickey keeps “an open mind”, it’s that the writing lacks any hyperbole or unexamined assertions. “Nanny dogs, you say? Well, let’s just look into that…”


Dickey is also the first writer I’ve come across who truly digs deeply into the classism and racism behind the hate of pit bulls. While I’ve admired writers like Shirley Thistlewaite and Bent Toellner, and many other “pit bull advocates” like them for calling it out, Dickey finally lays it bare as never before. It's the core theme of the book. And with so many citations that only those most deeply invested in hating pit bulls could ignore it.


It would be a disservice to call this book “balanced”, because, as she points out, “balanced journalism” is too often used as an excuse for false dichotomies while also an excuse for journalists to give too much weight to fringe voices for the sake of excitement/ratings.


What it is is honest, thoughtful, and well-researched (I’ve seen textbooks with shorter indexes than this biography). It well deserves it’s spot in the NYT bestsellers list.


*Some chapters also had me sobbing like a baby - warning: if you can’t handle discussion about dead or suffering people or animals, don’t read.

Some California quail in Finley Wildlife Refuge in early April 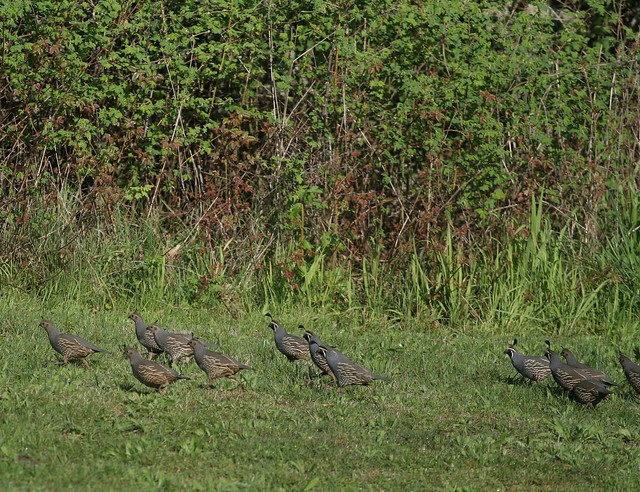 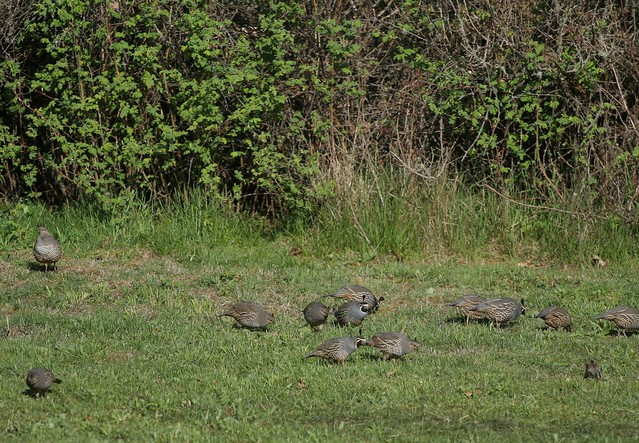