Have some money burning a hole in your pocket? "Observations are the meat and potatoes of science"

One of my fave vet bloggers has an interesting entry about vets recognizing patterns when dealing with patients. She says:


Part of being a good doctor is learning to recognize patterns. This can generally be agreed upon by medical professionals. A more subtle part of being beyond good and being excellent is realizing when to ignore the patterns so that you don't miss something really important.

She goes on to describe a recent event where she used the age and breed of a dog as important factors of her initial diagnosis, and only later realized they were irrelevant.

Humans are great at pattern recognition. But we are also really great at fooling ourselves.

Perceptions are easily altered by expectations. And one of my great annoyances are people who mis-use scientific terms and ideas to further an agenda that isn't based on science, but on their own expectations.

People who support Breed Specific Legislation (BSL), are notorious for not only not knowing the difference between inductive and deductive reasoning, but for hypocritically applying such reasoning to their own arguments.


Take, for example, some observations of from my own experience: By my own rough count, I have interacted closely with at least a hundred dogs who would be identified as "pit bull types" under BSL, and I've observed many dozens more from a distance. In many cases, the interaction was very stressful/painful for the dog. In other cases, it involved me approaching an unknown stray dog, catching it, putting in my car, and taking it to a shelter. In other cases, it involved me making the dog do something it didn't want to do, like go back into a kennel after a walk. I've never found any of my interactions with these dogs dangerous. I have not been injured. I was bitten once, and by "bite" (another word hard to define), I mean he closed his teeth on my fingers.

The prediction of BSL advocates, is that "pit bulls" are more dangerous than other types of dogs, in particular, they are more likely to bite a human, and when they do bite, it's more damaging. Yet my own, not insignificant experience this is not true. But all of MY experiences don't matter (to BSL advocates, anyway) because they're "only anecdotes". Observations and experiences from experts in the field don't count, either.


At the same time, BSL advocates demand that THEIR experiences and anecdotes ARE important and must be used as evidence for BSL. For example, a medical professional who has seen serious dog bite injuries first hand. They don't even feel the need to have seen a pit bull, nor do they feel the need to do any research about dog breeds; a second- or third-hand report is enough for them to support BSL.

What would it take for me to support a ban on, or elimination of, "pit bulls"?

There would need to be actual statistics about the relative dangers of different dog breeds. BSL advocates claim these exist, but they don't really.

For that to happen, there would need to be a relatively accurate "doggy census" performed so we'd know what our overall population of "pits bulls". Right now, we only have guesses about the true number of pet dogs out there, and an even vaguer guess about breed numbers.

For it to be relavant, mixed breeds would either have to be DNA-tested (a technology still frought with inaccuracies and plagued by false negatives), or  left out of the equation (making any real-world application of such a study nearly useless considering the large number of mixed-breed dogs out there).

Also for it to be relevant, "breed", especially "pit bull", would need to have a clear, unambiguous definition or it is useless to try to compare to other "breeds".

And here the problem really begins. "Breed" seems like such an easy thing to define, especially for the layman. The AKC has fooled a large number of people about what breed is and how it is defined: namely, that each breed is as distinct as its own species. But the AKC has only been around for 130 years. Dogs have existed for thousands of years. And the AKC only represents a fraction of the dogs and dog-owners out there.

Lets forget about the millions of unidentifiable mixed-breed dogs out there for a moment: Even within the population of AKC-registered dogs, breed characteristics blend together and overlap. Could your average animal control officer differentiate between a pure-bred Manchester Terrier and a Miniature Pincher?  Flat coated retrievers are not much more than black golden retrievers, and a number of the medium-sized terrier breeds are identical except for which colors are "allowed".

There's a reason that half the stray dogs put up for adoption in shelters are labeled "shepherd mix" - identifying the breed(s) of an unknown dog is difficult and often impossible. Some shelters have stopped doing it altogether, unless the physical traits are extremely obvious. Hence the birth of the "American shelter dog" breed.

What about all the "pure bred" dogs that aren't registered with the AKC, or at all? Pure bred dogs registered with a working dog registry are often very different looking than their AKC counterparts. Does that mean that one or the other isn't a valid registry? Or that one of those dogs isn't actually a "basset hound"?

Many "pure breds" aren't registered at all. A great example from my local area are working cow dogs. Most ranchers, if asked, would say they have a pure bred border collie or Australian shepherd, or heeler. Yet, most of the time, these dogs are not registered, are not part of a kennel club, and no one is enforcing a breed standard (except what the individual breeder had in mind when they thought "border collie"), and in many cases, the breeder isn't keeping track of pedigree for more than a few generations. These dogs tend to show a much wider range of phenotypes than AKC-registered dogs do. They blur the lines so much between the modern herding breeds that half the time, if the rancher didn't tell you, you could call an individual dog any one of those breeds. (And any one of them could be called a farm collie.)

"Breed" is very difficult to define if you think about it for more than thirty seconds.

Many BSL advocates would ignore all of this and simply say that most people know a pit bull when they see one, and can correctly identify one on the street. This is completely unverifiable speculation, and worse, has been proven wrong in several notable cases, including when  done by Animal control officers.

The more specific you get, the more useless breed definitions or identifications become. And by the time you get down to it in practical terms, what an individual dog looks like DOES NOT MATTER.


The main ways that breed identification are applied, are also the ways where it's completely useless in a practical sense.


1) An ACO picking up a stray dog off the street and bringing it into a shelter to be adopted out to the pubic.

2) A child approaching a strange dog: in a neighbor's yard, in the park, at the beach, whatever.

3) You're out jogging and see a loose dog up ahead.

4) You're getting ready to introduce your new baby to the family dog.

These examples are important for public health, and in each one the way a dog looks DOESN'T MATTER IN THE SLIGHTEST. If you have any brains at all, you'll be looking at the demeanor of the dog, how its acting, where it's eyes are looking, the hardness of its gaze, if its hackles are up, if its tense or relaxed, how its tail is positioned, or growling, or running or walking or panting ... the list goes on. How long its hair is or how floppy its ears are DOESN'T MATTER.

So why do BSL advocates try to pretend it does?

1) She now loves the car. I no longer leash her between the house and the car. I just open the front door, give all the dogs their release word, and she runs with them (a space of all of 15 feet) and waits eagarly to jump into the jeep. It wasn't that long ago that I had to pick her up and carry her that same distance and place her in the jeep.

2) Likewise, she no longer seems to be afraid of doorways/thresholds, or at least the ones she's familiar with she no longer pauses before rushing through.

3) She has yet to have a single accident in the house. You'd think a feral dog would be a lot harder to house train, but I wonder if, because she lived only outside for so long, that she makes an even greater distinction between "outside" and "inside" than other dogs (who're raised indoors) do. My theory doesn't hold for Sammy, however, who was also an outdoor-only dog up until I got her at the age of 4 months, and she STILL will defecate in the house if I don't respond to her cues quickly enough.

4) Leash walks around a suburban neighborhood are still very stressful for her. But we went hiking in an off-leash area and she thought it was great. She still has a lot of work to de-sensitize her to people and vehicles. 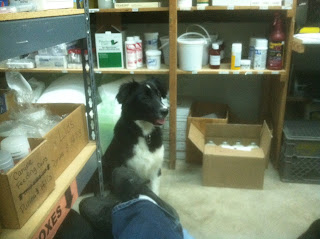