Who to blame for shelter dog euthanasias?

So, you saw a sad advertisement on social media about shelter pets dying from "lack of homes". You got sad, then you got mad. Time to blame someone! Odds are good, whoever made the ad already has a target handpicked: Is it... breeders? "irresponsible" pet owners? Maybe the solution is to punish people more, to enact more laws, give the maker of the ad money?

It feels good to blame "the other" for bad things. It's human nature. But let's all take a breath and consider what's really going on. Since the odds are good that the ad you just saw fudged or outright lied about some statistics, let's start with...

About 670,000 dogs are euthanized in US shelters per year. Of those, about 10% are euthanized for a good reason** (ie, the same reasons that a compassionate pet owner would). So, the number of deaths-from-lack-of-home is actually about 570k.

Good news: There are about 78 million pet dogs in the US, so 570k dogs represents less than 1% of the dog population as a whole. Overall, we as a society are doing pretty good by our dogs. Let's not lose sight of that.

Even more good news: even though it's still a large, sad number, there are actually more than enough homes available for these dogs***. It is a complete myth that there is an "overpopulation" of dogs in this country. It might have been true in the 1960's or '70's, but now it is not. There are 17 million potential homes, and only 570,000 dogs killed for "lack of a home". The only real question is, how to get them into the hands of people who are looking for them?

Logically, since things are already improving every year, if we want to end unnecessary euthanasia. we should focus on the things that work, and keep doing them but even better. The solution to needless killing has nothing with dog breeders, and actually not even all that much to do with the people who relinquish their pets to a shelter. The problem, and the solution, lies mostly with with the decisions that shelters make.

What do "good" animal shelter policies look like? They have pet retention programs, they work actively to promote adoptions, actively work to reunite lost pets with their owners... etc. 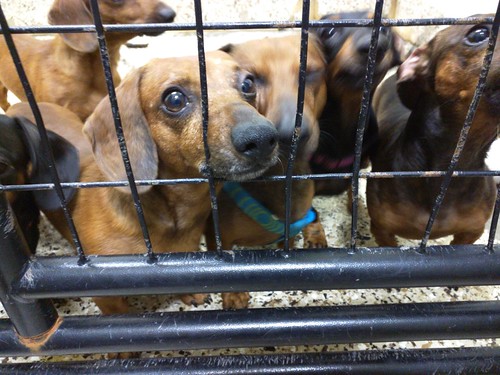 What does a "bad" animal shelter look like? They don't do the things listed above. Here's some examples.

Some more examples contrasting good vs. bad policies, and how they affect euthanasia rates.

Here's a story of how a bad shelter became a good one.

You still mad about dogs being killed? Good! Use that anger to personally improve the kill rates in your local shelter. If it's already a good shelter, or is on the right track, you can volunteer or otherwise support them. If it's a bad shelter, you can help them get on the right track, or, if they're stubborn, you can speak out, protest, boycott, attend city council meetings... all that good stuff. Be an actor, not a keyboard warrior. And don't share memes without checking them out first.

Maybe you're already very active in the rescue community, and you're angry because it seems like, where ever you turn, you see irresponsible people dumping their pets at shelters. I'm here to remind you that what you see is never the full story, if you knew what people go through when they surrender pets, you wouldn't be so quick to judge, and, even if they are the worst people in the world, they represent a tiny, tiny fraction of dog life in the US. Don't let your anger blind you to the fact that things are getting better all the time, not the reverse. Don't use your anger to spread lies and fear monger. Don't lash out at potential allies like dog breeders. Look at the numbers above and take a moment to celebrate before turning back to the work.


*There is no national organization that tabulates these stats, they vary from state to state, and even from shelter to shelter. I'm using the best estimates available at this time.

**"Good reason" is extremely subjective, and is open for discussion, most knowledgeable people in the field agree that an appropriate "kill rate" for shelter population is somewhere between 1%-20%. I've taken a middle number here for math purposes.

***This is grossly oversimplified, because clearly not every dog will be right for every family, and the US is just too physically large to move dogs around easily, and we can talk about the issues with these numbers, BUT, the point is clear: you can't say that an "overpopulation" exists.

An Exploration of the Re-Homing of Cats and Dogs in the U.S. (PDF) 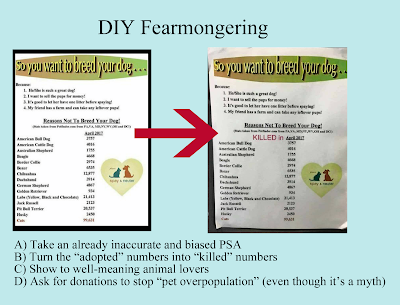