Stop Being Terrible at Werewolves: A Friendly Guide for Fantasy Writers 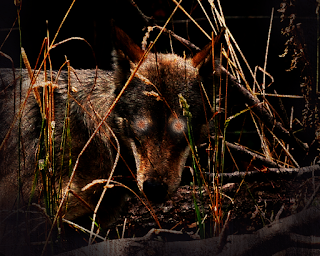 The modern concept of werewolves originated some time after we stopped being hunter-gatherers -  who weren't afraid[1] of wolves, and in fact made friends of them and turned them into dogs - and sometime before the Renaissance. Wolves were the last widespread, man-eating large predator in Eurasia. They could leap out of the dark woods to attack livestock and eat children and unarmed peasants. The perfect animal to hang our collective monster fears on.

This wolf, the "werewolf-wolf", is not based on real Canis lupus; it's simply a stand-in for all things savage and animalistic. Fantasy need not be "realistic", but a problem arises when writers create a werewolf that isn't a generic savage beast, but a detailed, fleshed-out species with its own society based on the way wolves actually operate in the wild. And it's almost always done poorly. I don't care if your lycanthropy is based on magic, Magik, viruses, or aliens;  If you want to base your fantasy creature on real-world animals, you need to base it on real, up-to-date science about those animals.

I recently had to quit an urban fantasy series[2] I liked because I just couldn't stand the werewolves any longer. The rest of the world-building was great, but bad science will get to me every time. Here's an excerpt from the first chapter of the first book in the series:

"'...eat, then come back out when you're ready.' ... He heard the command and stiffened, raising his eyes to meet mine. ... I knew better than to give orders to a werewolf - it's that whole dominance reflex thing. Werewolf instincts are inconvenient - that's why they don't tend to live long. Those same instincts are the reason their wild brothers lost to civilization, while the coyotes were thriving[3], even in urban areas."


Keep in mind, the werewolf character in that excerpt is young, injured, and came to this person for help. And yet even in such a state he still "instinctively" hates receiving even the mildest form of an "order", to the point that the person trying to help worries that he'll attack her because of the way she phrased a single sentence.

This lays the ground work for werewolf social interaction for the rest of the multi-book, best-selling series. Werewolves are obsessed with hierarchy and dominance. To the point of stupidity - they often get distracted in the middle of things they're doing, including fighting an enemy, to turn on each other and fight their own comrades and family. All of them (except for some very rare individuals) are constantly, every moment, every single interaction, battling to become the "Alpha" and control the rest of the group.

I read a fair amount of contemporary urban fantasy, and this is a very typical example of how werewolves are portrayed. And it stems from an outdated and over-rated idea of wolf psychology, which can be summed up in one word:

Please, for the love of doG, stop with the "alpha wolf", "pack leader", "dominance is everything" crap. That's not how real wolves (or dogs, for that matter) work. We (western science anyway) used to think that's how canines worked. But we've learned a lot in the last 40 years. In fact, one of the originators of the term "alpha wolf", who is still a wildlife researcher, has since strongly rejected it, going so far as to beg publishers to stop reprinting his older work.

I get why fantasy authors continue to use this outdated theory of dominance as a framework for werewolf world-building. It's simple, most laypeople are familiar with the concept, and it's satisfying to the chimpanzee inside our brains. But it's boring, it's unscientific, and it's a sign of lazy researching.


How To Be Better at Writing Canine-Based Fantasy Creatures

Wolf packs are families. There is a father and a mother, who mate for life, and their children. There may also be aunts, uncles, grandparents, and cousins in the same pack. There is no all-powerful king. The mom and dad may not even have many leadership roles. They often do, simply because they're also the oldest and most experienced in the family, but it's by no means a given. It may be other family members who decide when and where to hunt, or where to get water, or when and where to explore/check territorial marks, how harshly to discipline trespassers, etc.

The main thing the "alphas" are concerned with is that they are the only ones allowed to have babies (this isn't a strict rule either! More on that in a moment). This is for good, evolutionary reason: puppies survive better if the whole pack focuses on sustaining just one litter at a time, sharing the duties of babysitting, providing food, and teaching. Too many puppies at once, and all the puppies starve or die from accidents because there weren't enough adult eyes watching.

This "law" of no babies is loosely enforced by the mom and dad by discouraging the rest of the family from mating. The type of discouragement, and how rigidly it is enforced, will vary a lot from pack to pack and depend on how plentiful resources are. There's no need to "fight" their parents for leadership - if a son or daughter wants to have babies, they just leave and start their own pack. Even if one of them did feel the need to fight their parent, what would be their prize? Wolves mate for life, and they choose each other. If a son kills his father, there is no crown or queen to inherit, he's just as likely to be driven off by the rest of the family as he is to "win" a kingdom.

If a daughter does get pregnant while still living with her natal pack, it is usually by a rogue male (scientifically known as a "Casanova male", which is fantastic) who's been creepin' around the edges of the family's territory. Under normal circumstances, these puppies would be ignored by the rest of the pack, and die of neglect. It's possible they may be outright murdered by their own grandparents and/or the daughter may be shunned or kicked out of the pack. When resources are plentiful, however, sometimes the parents allow their daughters to have puppies, too, and the whole pack raises all of them at once.

Another "law" that is often bent and broken: territory. Wolves are often very territorial, and spend a good amount of time patrolling and marking the family's property line. Trespassing wolves may be killed on sight, but not always. Sometimes, new wolves are welcomed into the pack. Sometimes, they're allowed to visit and even mate with some of the females, but aren't really welcome to hang out very long. Sometimes, families join together into "super packs" for awhile, then go their separate ways after awhile. Some children are kicked out of the pack when they're mature; some choose to leave on their own; some choose to stay with their parents for many years; some may leave for awhile and then come back.

Like human families, each pack is different. Some will be more egalitarian, while others will indeed have authoritarian parents that are every bit the stereotypical "alpha". But they are also dynamic. If a father or mother is too much of an a-hole, members may simply leave, which would be detrimental to the "alphas" because then they have less help raising their puppies, deincentivizing extremely aggressive kin behavior. If a younger member of a family fights or kills their parent (which does happen sometimes), it's a lot less less about "fighting to be dominant" and a lot more, "jeeze, dad was such an abusive dick, it's so much better since he moved out".

Wolves can indeed be brutal, but it's not a given. Wolves are flexible, adaptable, social, and intelligent. It makes no sense for werewolves to be mindless, rigidly adhering to hierarchy, and wasting energy fighting each other. The real lives of werewolves could be just as complex, dynamic, rich, brutal, bloody, as real wolves. Let's not limit ourselves.


Some examples of good werewolf world-building

Shout out to Hemlock Grove for creative and well thought-out werewolves that have an animalistic nature and all that fun duality symbolism without the weird baggage of dominance theory.

Shout out to DiscWorld for a well-formed and complex werewolf society that does not involve any "alpha dog" nonsense (that I've seen; I haven't read all the DiscWorld books). Although werewolves are quite harshly hierarchical, in typical Pratchett fashion, it's allegory about human monarchy/authoritarianism rather than anything to do with real wolf "pack dynamics". Bonus love to Pratchett for pointing out many times that wolves and dogs are not very different at all.

Shout out to Harry Potter, in which lycanthropy is treated mostly as a disfiguring disease. There isn't so much a society of werewolves, as there is a loose association of people who come together because they're infected by the same disease, and therefore face the same discrimination from the rest of the world. Werewolves who are bad, violent, or authoritarian, would be so whether or not they were infected with lycanthropy, not because of anything to do with wolf psychology. J.K. Rowling goes out of the way to point out in the text that werewolves don't act much at all like real wolves.


Footnotes
[1] The old paradigm of early dog domestication (where cave men hated wolves and wolves were scared of cave men) is falling out of favor. The newer theory, is that wolves and early humans were hunting partners to one extent or another as far back as the Neanderthals or earlier. For more info, read the wonderful book How the Dog Became the Dog, by Mark Derr (or google his essays), and the many essays on the subject by Scottie Westfall. This is also something I explore in my "Domestication Stories" series of short stories.
[2] Which I won't name. You can probably figure it out
[3] A side note of irritation for this quote specifically: new research suggests coyotes are much closer genetically to wolves than originally thought, and may actually be a subspecies of wolf, or that wolves and coyotes make up a species complex. This makes sense, because they are identical in almost every way to wolves. The only reason they're currently thriving, and wolves aren't, is that they are smaller. They can live off smaller prey and lower quality foods like fruit and garbage that simply won't sustain the mass of a wolf, a diet that means they slip under the radar easier than an animal that requires large prey. It means that  a century ago, when the government was giving out bounties on a whole list of "unwanted" animals, coyotes weren't as heavily persecuted as wolves were. Coyotes only managed to expand their range after humans systematically killed off most of the wolves in North America. Not because they're smarter or have somehow less "volatile instincts" than wolves.