We bought a house in autumn 2016. It's in an old neighborhood with lots of old, established trees and shrubs and things. I'm trying to replace all the invasive ornamental plants with native ones. Here's the progress so far:

Pulled out all the english ivy that's creeping in from the neighbor (some day, I'll see if they'll let me kill all their ivy, too), and pulled out all this viney ornamental weed in the shade garden, whatever it was (it used to cover all the ground between the house and the path below). 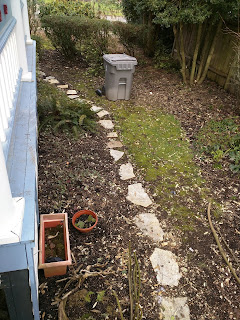 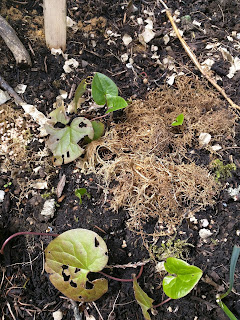 Despite some slug damage, the wild ginger I transplanted last autumn is doing well, so I went out to the parents' property and liberated some more, plus some other native plants, mostly for the shade garden. Scored some sword ferns, oxalis, bleeding heart 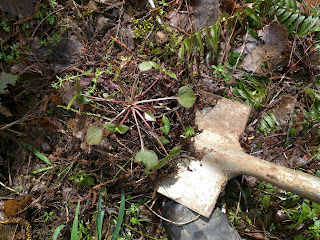 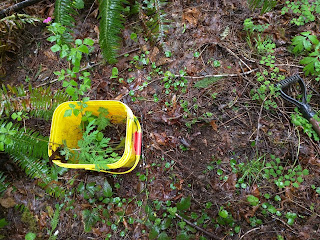 I also got a couple cuttings of salmon berry, and salal. 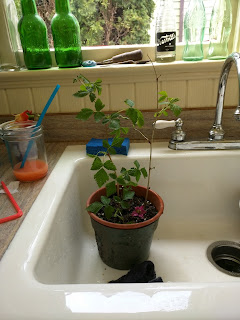 We'll see how they root. 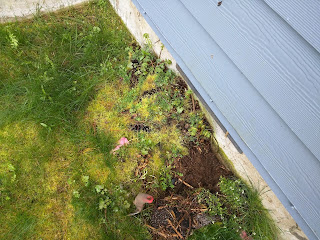 This clump of dirt and moss pictured above is actually a very old sword fern that was living next to my parent's house. 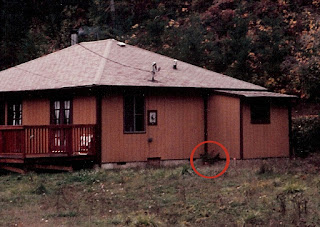 Here it is the oldest photo I can find of it, c. 1985, but it might have been growing there for many years before that. The house was originally built in the '30's or '40's. Dad's been thinking of killing it for years because it blocks one of the vents, so I saved it. Let's see how it likes being a suburban fern.

On a related note, it is surprisingly hard to find out how long a sword fern can live. Individual fronds only live a few years, but the rhizomes can obviously live for decades. If anyone knows of a reputable source that has this info, I'd love to know.
Posted at 4/09/2017 12:49:00 PM