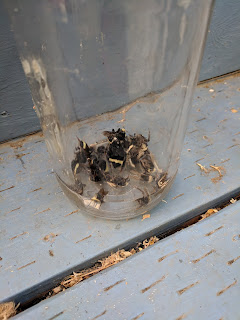 I don't think their deaths are natural. The slow but noticeable pile-up of tiny fuzzy bodies starts in early July, long before the cold nights start taking their natural toll on the population, and I maintain two bee baths nearby so it's not likely to be dehydration, either. And of all of my yard, it's only these 100 or so square feet where they accumulate; I'll find the odd dead non-native honey bee or wasp scattered all over the yard, but nothing near the numbers of bumbles in this one spot.

There is the possibility that this neighborhood simply has a lot of bumble bees. I've seen swarms of them on neighbor's lavender, and in my silk tree. The workers only live about a month, and it could be coincidence that I find so many in one spot. Maybe heat rising up from the asphalt happens to catch an abnormal number of weak workers already on their way out.

But I can't help but think it's related to pesticides. We don't use them*, and neither do our immediate neighbors, but I can guarantee that previous owners did. The house was built in 1910, so it's been through every single wave of modern pesticide use, possibly starting with the old fashioned lead or arsenic-based ones, followed by organochlorines, then organophosphates and carbamates, then pyrethroids and neonicotinoids. Most of the most popular pesticides in the last century last a long time in the environment, and could have left potential residues.

We have a curious lack of ants in the house, when many other locals have a huge ant population in their kitchens; we have a lack of wasp nests in the eaves, or under the porch, even this year, which has seen record numbers of wasps due to a mild winter. This probably means the perimeter and eaves were treated with pyrethroids in the last few years. And probably have been annually for decades, since pyrethroids first went on the consumer market. The soil and mulch left from previous owners, surfaces of the asphalt driveway, the foundation and eaves of the garage and the house, all probably have at least some residues of long-lasting insecticides.

Bee declines are more on the public's radar now than a decade ago, but of course everyone wants an easy answer and a "quick fix". The push to to ban individual insecticides like imidicloprid or other neonicotinoids  has the feel of a handy scapegoat, an easy-to-understand boogyman. What the science is clear on, however, is that the single biggest threat to pollinators (and most species, for that matter) is habitat fragmentation. Many of the same people so adamant about banning pesticides maintain pollinator food deserts in their own yards with a traditional manicured lawn.

My opinion is that residential use of pesticides for "frivolous" reasons (killing pests in ornamental plants including lawns) should be a lot more restricted, instead of banning their use in agriculture. At the same time, farmers should be given incentives for increasing biodiversity on their land, and reducing chemical inputs and reducing waste across the board (that includes long distance shipping, burning or trashing harvests when prices go down, etc).

I won't be having my soil tested because my actions would be the same no matter if it's pesticides or other things killing the bees: plant my vegetables in raised beds filled with fresh soil; mulch the heck out of everything else to bury any contamination; keep the bee-baths filled during the driest months; plant native flowers and shrubs that provide year-long food for pollinators, hopefully in a way that is so attractive from the curb I can convince my neighbors to follow suite.

In the meantime, every time I see another sad little fuzzy body in my yard, I get to ponder the follies of modern living.

Image description: A photograph of a glass jar holding about twenty dead bumblebees.

*With a few, very tiny exceptions, such as fipronil or imidicloprid flea drops on the cat and dog.