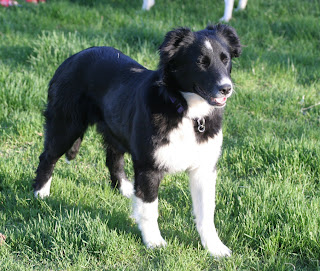 "Feral" might be a strong word to use to describe Teifa, but I feel justified: she'd been on her own in the countryside on the outskirts of town for at least 6 weeks before we caught her. She's about 6 months old.

The woman had been watching the border collie puppy for weeks, leaving food out and slowly earning her trust to the point where, if the woman sat quietly on the ground, the girl would lay next to her to be petted. She said the pup seemed to want attention really badly, but was terrified at the same time. The woman wanted to keep her but already had four dogs of her own, two of which were ancient small breed dogs with health problems who couldn't handle a border collie puppy's play style. She knew that, even if she could catch the dog, taking her to the regional pound would be a death sentence for such a shy creature. There is no "dog catcher" or animal control where we live. I agreed to take her.

I came armed with lunch meat and a slip lead. She had coaxed the pup into the house. When I came in, the pup was trotting back and forth nervously in front of the sliding glass door in the woman's dining room. When we walked in the room she froze, then ran to the corner. I turned away and sat on the kitchen floor, tossing a bit of lunch meat to her without looking. The woman followed my lead and sat down and we chatted quietly for about 10 minutes. But it only took about 3 of those minutes for the pup to figure out where the lunch meat was coming from. She'd dart forward, take a bite of lunch meat, then retreat 5 feet to eat it and think about things a minute before darting forward again. If either one of us moved too quickly, she'd run to the corner of the room.

I knew it was going to go well when she started taking meat from my hand almost immediately. After about 15 minutes, she let me rub her chest. As she got more comfortable with my presence, she started asking the woman for attention: running to her and wagging her tail and even play bowing, but she was too skittish to actually let us touch her very much.

Finally, the woman slipped the leash over her head. I decided to make a clean break and not let the pup think about the leash too much. I pulled her toward me and grabbed her in a firm hug and stood up. She struggled against the leash, but once I had ahold of her she froze (and urinated on my shirt a little). I carried her to the car and got in the back seat. I held her while my husband drove us home and she never struggled or made a sound.

I carried her to the bedroom/office and released her. We played the same game as in the kitchen: I sat on the floor and didn't look at her but kept offering her lunch meat. She didn't seem at all traumatized by my manhandling or the car ride, and was more than happy to take food from me. After about 30 minutes, she let me touch her head and ears and was rolling over to have me rub her belly. Still, any sudden moves and she leap up and run to the corner of the room, and she was very uncomfortable if I was standing up and wouldn't approach. She urinated a few times in submission/fear.

I let Sammy into the room. I thought her happy-go-lucky attitude and friendliness towards other dogs would help relax the pup, and it worked: Teifa watched me interact with Sammy, and something seemed to click. She would stay closer to me, and when I would call Sammy to me, Teifa would come, too.

After another 30 minutes, I let them out in the (securely fenced) yard. Teifa ran around sniffing everything, and watching what Sammy did, and darting in to me for a quick chest rub before running off again. I dragged an old blanket to the grass and took a nap in the sun. Teifa actually curled up against me for a few minutes. Eventually, I had Tom introduce himself to her. She urinated at the sight of him (an effect he has on many dogs). But after a few minutes of him laying on the floor, she was coming up, wiggling her happy/nervous wiggle for pets. At bed time I took a risk and let her loose in the bedroom. No accidents.

Day two:
I took her to work to get a health exam and vaccinations because I'm paranoid about parvo and don't want to wait. I took Sammy along to help her relax. I carried her everywhere because I don't want to start leash training under such stressful conditions. I got an official weight: 40.6 lbs. Oof. She took the whole thing like she did the day before: stayed frozen and peed a little. I put her and Sammy in the car for the rest of the day (with potty breaks, of course) and they didn't destroy a single seat cushion.

I did a little leash training in the living room: put the leash on and reward with treats if she gives to pressure. She did the typical "fish on a line" routine at first, but damn is she a quick study. Within 5 minutes she understood that giving to pressure equals cookie.

Day four:
Five more minutes of leash training. No more fish on the line. Left all the dogs loose in the house with a door open to the back yard while we're both at work. No messes, nothing destroyed. Whew.

Day five: Five more minutes of leash training. Tom is still veeeery scary when he first comes in the door, but I no longer make her pee herself no matter what I do.

Day six:
She greets me very enthusiastically when I come home, including jumping up to bite at my hair (border collies are weird). I try to play with her in the yard, but she still doesn't seem to get what toys are. She's more than happy to chase Sammy around as I play with her, though. She'll stop periodically to collapse on her back at my feet for belly rubs.

Today is day 8, and she's like a different dog. She'll jump into and out of the car, comes when called (mostly), no longer pees for me (though she will for Tom), and can take a leash walk around the block without freaking out (too much). She doesn't act like a dog that was abused, she acts like she's ignorant about people. Her fears are so easily overcome its wonderfully ridiculous. She has yet to have a single accident in the house. Even though I do things your not supposed to, like leave her loose in the bedroom at night (we haven't done any crate training at all yet).

Before you ask, yes, I considered keeping her. But no, while I love being over run with border collies, she'll make someone else a really nice dog pretty soon. 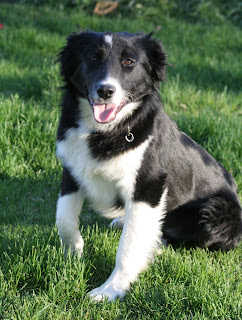 Awesome! I really enjoyed this post. Two questions. Where did the name come from? Also, how do her and Zelda get along?

1) Tom named her after a video game character, don't ask me which.

2) Since Teifa is extremely submissive, and Zelda is bossy, they get along pretty good. When they first met each other, all Zelda had to do was give her a hard stare from 10 feet away and Teifa threw herself on the ground, exposed her belly and (you guessed it), peed.

3) I'm really glad she's getting over the whole "pee at everything" stage.